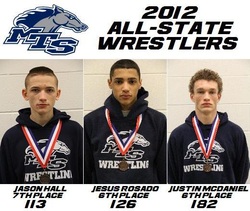 Moore had 3 All-State wrestlers for the first time since 1989 when 4 wrestlers placed. Jason Hall (113) placed 7th. Jesus Rosado (126) and Justin McDaniel (182) both placed 6th. 3 Wrestlers in one year was a first since Coach Mike Thomas took over in 2003. The team placed 18th which is the highest team placing Moore has had since Coach Thomas' tenure. The best team in Moore Wrestling history remains the 1989 team who had 4 state placers and placed 10th. "We had no seniors this year and people know that we will be a top team next year. With everyone coming back I see a top 5 finish and a run at the state title." said Coach Mike Thomas. Moore should be pre-season ranked top 10 and the top team in Jefferson County next season.


Jesus Rosado won his 2nd Most Outstanding Wrestler award of the year for another spectacular win over 6th ranked Ian Kahl of Trinity by a score of 6-4.

The Varsity wrestling team went 3-2 at regional duals this weekend upping their record to 25-8 on the season. The team defeated Seneca, Atherton, and Central. MTS lost to Trinity and a heartbreaking one point loss to St. X who they beat earlier in the year 36-33.

Moore finished 3rd with not a single senior in the line-up. Next years JCTC will be held at Moore and we will be winning it all at home!

You can read the article and check photos at
http://www.courier-journal.com/article/20120107/SPORTS05/301070104/1031/sports/Southern-High-School-wins-county-wrestling-title?odyssey=mod|newswell|text|Sports|p 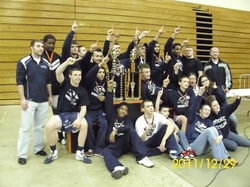 Moore went in to the Fern Creek Gladiator duals and tournament with high hopes but totally exceeded all expectations by destroying the competition. The Gladiator is two events in two days. The first day is a 16 team duals tourney in which Moore went 5-0 defeating Central for the championship by a score of 60-15. Moore also blew out PRP 76-6, Bullitt Central 71-6, Scott 56-18, and Male 72-6.

The varsity wrestling team took a trip to Meade County for the first time to participate in the Tsunami Duals. Moore had a tough first day wrestling Central Hardin, Oldham County, and Meade County. Moore lost to both Central Hardin and #7 Oldham County and then suffered a tough 1 point loss to #11 Meade County. Moore went on to beat Bullitt East. On the second day Moore went 4-0 defeating Ft. Knox, Desales, #16 Christian County, and Ohio County.

Toby Siddens at 25-0
Toby Siddens went 5-0 at the Oldham County Super Duals on Saturday and is now 25-0 on the season. Siddens rematched Jacobs from Elkhorn who defeated him last year in the semi-finals of the state wrestling tournament. This year he beat him by tech fall 17-2 in the 2nd period!! The Moore Middle Mustangs finished 2-3 on the day. 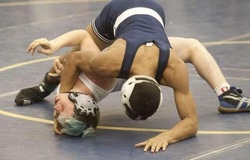 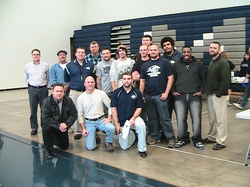 Friday Nov. 18th marked the 6th annual Navy/Gray Scrimmage and alumni night. This was by far the best Navy/Gray Alumni Night yet!! The Gray team defeated the Navy team 60-51.