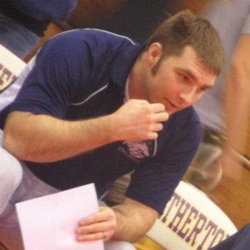 Coach Thomas is a 1998 alumni of Moore where he wrestled and played football for all 4 years. Coach Thomas went to WKU to play football and study Physical Education. He attained his degree in Dec. 2002 and started teaching physical education and health in the fall of 2003.

Coach Thomas started as an assistant with Moore in 2002-2003 and took over as the head coach in the 2003-2004 season. Coach Thomas also started up the first middle school team in 2002-2003 while he was assisting the high school and then started up the youth program in 2011. He was voted the Region 4 Coach of the Year in 2017 and the KHSAA State Wrestling Coach of the Year in 2019. 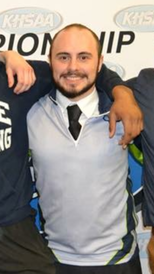 Coach Wright is a 2011 alumni of Fort Campbell High School where he was a multi-sport athlete in Wrestling, Track, Cross Country, and Soccer. He competed collegiately at John Carroll University in Cleveland, Ohio where he earned his BA in History and Secondary Education. Coach Wright has experience coaching in Virginia with Grafton High School and the PWA Wrestling Club and in Ohio with Cleveland Heights High School. Since 2016 Coach Wright has served as an assistant coach at Moore, including a stint as the Middle School Head Coach in 2016 and the Women's Head Coach in 2019. He has been a key part of Moore's success the past few years and has also worked extensively with Kentucky USA Wrestling as a National Team Coach and the Greco-Roman chair of the State Board.

Coach McKenna came to Moore in 2019 after previously coaching at DeSales as an assistant coach and at Iroquois High School as the head coach. Coach McKenna was a state qualifier and 2006 graduate from DeSales High School. Following his wrestling career Coach McKenna began an MMA career that included professional fights in Japan. Coach McKenna works as a Firefighter when not coaching Moore Wrestling.

Coach Fozo came in 2020 to coach the women's wrestling program at Moore. She started wrestling from a young age in Mishawaka, IN, and continued for the past 14 years. In that time she won 4 folkstyle ISWA state titles as well as 3 freestyle state titles. During her junior year of high school, she won the War of the Roses Nationals in both folkstyle and freestyle and was an All-American in USAW folkstyle nationals. Coach Fozo wrestled for McKendree University all 4 years and was part of the national champion team in 2019. She teaches English at Moore