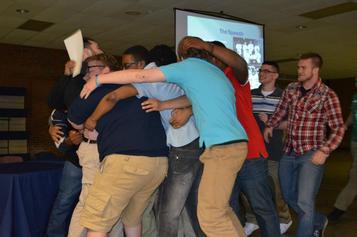 Coach Thomas getting a group hug from the high school guys.
The 2013 banquet was the best one yet!! Besides me proposing to my wife at the 2011 banquet ;) We celebrated one of the best years in MTS wrestling history! We honored coaches, managers, wrestlers, parents, and other support. We also had Justin McDaniel sign his letter of intent to wrestle at Campbellsville University! Thanks to BAMM and all the other parents and support who helped make this happen. Also a big thanks to Chrissy Siddens and the Fishery for providing the great food.

This years award winners were as followed: 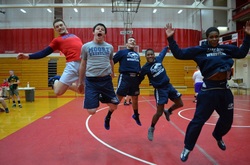 3 seniors competed for their last time ever at the annual Battle of the Bridge All-Star meet at Jeffersonville High School. Justin McDaniel (195) went 2-0 pinning one opponent and scoring a major decision against the next. Kenny Keller (170) wrestled two great matches and finished 1-1. Keith Bray also looked good in his last outing as a Mustang as he went 1-1.

Underclassmen Ruben Rojas (160) had the toughest draw as he went 0-2. Rojas hit a very sweet overhook firemans carry. Perfect highlight reel material. Bobby Poynter (120) went 2-0 dominating both his opponents. He pinned his first opponent in under 20 seconds and majored his second opponent. 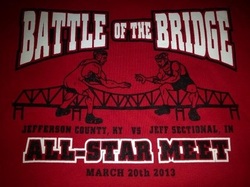 Wrestling begins at 6:30pm. This is the last time you will get to see seniors Keith Bray, Kenny Keller, and Justin McDaniel wrestle in a MTS Singlet! Don't miss it. 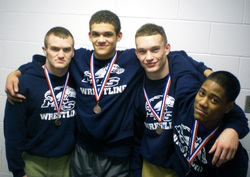 The 2013 team was one of the best in school history finishing with a 19-5 dual meet record, 11th in state, 4 All-State wrestlers, and several tournament wins and high finishes. 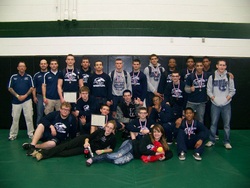 These qualifying wrestlers will compete at the state tournament Friday and Saturday in Lexington Kentucky at AllTech Arena.

Moore took 6 wrestlers to compete in the region 4 JV tournament Monday at Fern Creek and came home with 3 champions! Alex Hopkins(120), Ruben Rojas(160), and Trey Watts(220) all won the championship at their weight classes. All 3 wrestlers will advance to the JV State Tournament this Saturday 1/2/13 at PRP.

Moore placed 4th in their first ever trip to the state duals. Moore defeated Spencer County 72-12 and Walton Verona 52-26. Moore lost a close match in the semi-finals to Johnson Central 36-28. Moore then wrestled for 3rd place and lost another close match to Larue County 37-33 to finish 4th. 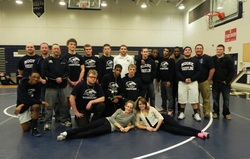 Moore celebrated one of it's biggest senior wrestling classes in school history Friday night against PRP, Valley, and J-Town. Moore went 3-0 defeating J-Town 54-22, Valley 78-6, and PRP 61-9. Senior wrestlers and managers were honored between the Valley and PRP matches. BAMM (wrestling moms group) helped put on the event and did a fantastic job. Thanks for all your hard work and dedication seniors! Good luck! We will miss you! 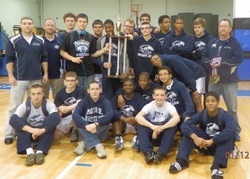 Moore defeated Spencer County 72-12, North Oldham 58-15, and then defeated Franklin County in the championship match 40-28 to win the first ever Section 5 Small School Duals. Moore will compete next weekend at the Dragon Invitational at South Oldham. 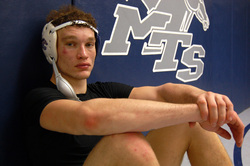 Article about Justin McDaniel and the MTS Wrestling team in this months Voice Tribune. Pick it up at your local grocery to add to your MTS Wrestling memorabilia. 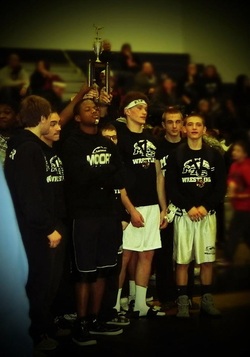 Moore will go after a sectional title this Saturday at Spencer County. 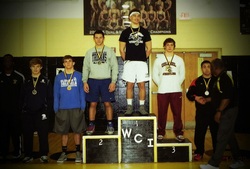 Justin McDaniel (182) won his 2nd tournament in a row as he became the Woodford County Invitational Champion at 182 pounds. A banged up Moore team finished 4th behind Gordon Lee(AL), Southern, and Woodford County.

Mikey Smith(160) wrestled tough all day losing by one in the championship match to Wyatt Courtney of Woodford County. Jason Hall(113) and Daylon Whaley(220) both finished 5th.

Moore will host and compete for the county championship this Friday and Saturday at Moore.

Still battling injuries, the Mustangs came in 2nd place at Saturday's Lafayette 5 Star Classic. Moore was tied with Trinity going into the finals but didn't have enough firepower to finish them off losing by 7 points. Moore will see Trinity Jan. 4th and 5th at the JCTC. Jason Hall (113) won the championship defeating hometown wrestler Luke Rearic 3-1. Bobby Poynter (120) finished 2nd, and Justin McDaniel (182) won a major decision against Jake Fooks of Bourbon County to win the championship. Toby Siddens (106) placed 3rd. Mikey Smith (160) knocked off ranked wrestlers on his way to a 3rd place finish also. Ruben Rojas (170) wrestled great filling in for a injured Sam Willbanks placing 4th. Daylon Whaley (220) placed 4th also his first week back from injury. James Searcy (285) knocked off the 4th ranked wrestler in the state and also placed 4th. Moore will be at the Woodford County Invitational this Friday and Saturday. 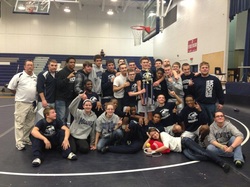 Moore came into this years Horsepower banged up and giving up one weight class with 3 starters out of the line-up and a couple of wrestlers wrestling through other injuries. It's been a tough season so far with a highly touted Moore team full of seniors and talented underclassmen battling through injuries early on. The Mustangs learned their first lesson of perseverance this season as they went 5-0 and battled a tough Henry Clay team to a 44-22 victory in the semi-finals and then defeating a good Southern team 41-25 for the Horsepower Invitational Championship.

Senior Justin McDaniel (182) capped off the dual victory against Southern with a 7-1 win over #1 ranked Sean Barrett of Southern. Barrett defeated McDaniel several times last year and showed no respect when asked a specific question about McDaniel in Friday's Courier-Journal. McDaniel kept that article for motivation and wrestled a great match.

Moore will travel to Lexington-Lafayette to compete in the Lafayette Invitational next Saturday. 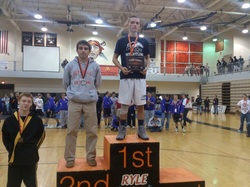 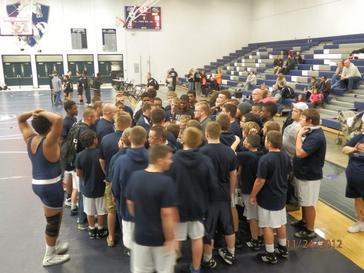 Coach Thomas speaks to the team after a big win against St. X.
The #4 MTS High School team finished 4-0 Saturday at the 4th annual Big Brother Duals with wins over Scott High, Holmes, Fern Creek, and a big win over St. X.

The middle school team went 2-2 with wins over Woodland Middle and Holmes. Moore finished with a combined record of 7-1. The gray team for both and middle also had exceptional days with lots of great performances from young wrestlers. 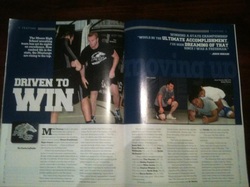 The MTS Wrestling team is featured in the November Vype Magazine. You can pick up a Vype Magazine at many area groceries including Krogers, ValuMarket, and Meijers. You can read the article online at the link below.

The Moore High School wrestling team starts the season pre-season ranked #4 in the state according to the official www.kentuckywrestling.com wrestling rankings. Also within those rankings Moore is the #1 team in Louisville ahead of both St. X and Trinity. "We are slated to have the best season in our team's history. This will also be the toughest. We can't just sit back and look at rankings and say thats how its going to end. Our goal is now a state championship. If we are #4 why can't we be #1? Its up to us. The goal is set and we are ready to work" said Coach Thomas. The Mustangs have 4 wrestlers ranked within the top 5 in the state. Jason Hall is ranked 3rd at 113, Jesus Rosado is ranked 3rd at 126, Sam Willbanks is ranked 4th at 170, and Justin McDaniel is ranked 3rd at 182. To check the complete pre-season rankings click below http://www.kentuckywrestling.com/forums/index.php?/topic/9907-kentuckywrestlingcom-hs-rankings-20122013-preseason-august-20/